Traineeship helps James to bounce back after hitting rock bottom 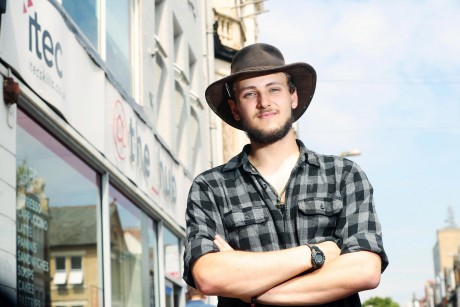 Teenager James Carter is getting his life back on track after hitting rock bottom when he found himself homeless for seven weeks, was involved in substance misuse and spent a day in jail.

The turning point for James, 18, from Newport, came when Careers Wales introduced him to the Traineeship Engagement programme at Itec Skills and Employment. He began addressing the barriers and enormous challenges he had already faced since being put up for adoption at a young age.

He is now working towards a NVQ Level One in Customer Service and a Traineeship Level One in Health and Social Care. As part of his qualification, he is an Itec youth mentor and has become a charity ambassador.

Now his learning journey has been recognised as he has been shortlisted for this year’s Apprenticeship Awards Cymru. He will be competing to become Traineeship Learning of the Year (Engagement) at the prestigious awards ceremony at the Celtic Manor Resort, Newport on November 9.

“I’ve had a really difficult upbringing and, even though I’ve had some really low points, I’ve always wanted to get my life on track,” said James. “I now have a focus in life and have started to realise my self-worth. I’m determined to succeed with a life I can say is mine.
“If my story can help any other young people get through bad times, to me it is already a winning entry.”

Irene Webber, James’ learner coach at Itec, said: “James has been through so much for his age, but he still spends most of his time helping others. We truly believe that the Traineeship programme has saved his life.
“Combining his qualifications and extensive personal growth, James’ story is the perfect example of how the Traineeship programme can create meaning and give focus to a young person, giving them self-belief and hope for the future.”

Congratulating James on being shortlisted for an award, Minister for Welsh Language and Lifelong Learning, Eluned Morgan said: “Apprenticeship Awards Cymru showcase the success of the Welsh Government’s Apprenticeships and Traineeships Programmes and the achievements of our star apprentices, employers, learning providers and trainees.
“Apprenticeships are a great way for individuals to gain valuable skills and experience while earning a wage and for employers to ensure their workforce has the skills to future proof a business.
“Increasing higher level skills and developing skills pathways that benefit the whole of Wales have never been more important.”