Training providers have collaborated with other organisations to hold a successful event to raise awareness of apprenticeships in Gypsy, Roma and Traveller communities in Newport.

‘The Future is in our Hands’ apprenticeships career fair was organised by the National Training Federation for Wales (NTFW), the Romani Cultural and Arts Company (RCAC) and Maindee Primary School, which hosted the event. 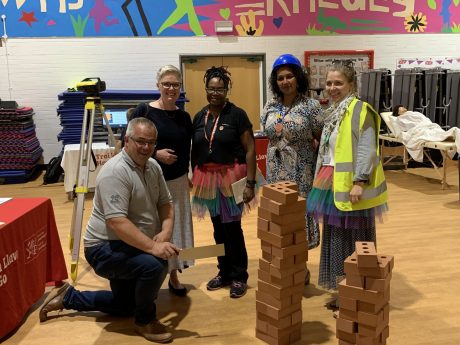 Members of the NTfW are focused on achieving a goal, set out in the Welsh Government’s Anti-Racist Wales Action Plan, to increase the number of people from ethnic minority backgrounds starting and completing apprenticeships.

The Welsh Government wants to see evidence that more people from ethnic minority backgrounds have started an apprenticeship by December 2022 and that the increase is maintained in the future.
The NTfW is a federation of more than 70 quality assured work-based learning providers across Wales.

The Newport event included several of ISEiW’s Have a Go activities, such as catering, hairdressing, beauty, IT, Automotive CAN, virtual welding and construction, demonstrating to young people and their parents the different apprenticeship paths available to them and how they can earn while they learn.

Apprenticeships, career development and English for Speakers of Other Languages (ESOL) courses were all promoted to young people and parents who explored various vocational skills which could lead to a career pathway.

“The fair was an ideal opportunity to work with the other partners to re-engage with Gypsy Roma Traveller communities to raise awareness of apprenticeships and the support available to learners.

“Seeing the apprenticeship providers, Careers Wales and other stall holders support the event and positively engage with the Gypsy, Roma communities was heartening,” she added.

“It generated requests to hold similar events in other schools, proving how effective and needed they are to improve access to apprenticeships and raise aspirations.”

Viera Matysakova, a Romani Cultural and Arts Company project officer, said: “Today, more than ever, communities are under lots of pressure, often struggling to see their purpose. It is crucial that we empower and inspire our young adults who are the drivers of change.

“Involving parents, siblings, extended families and the local community helps to create and extend the support network and starts to gradually remove the barriers they are facing.

“I would like to thank everyone who got involved in such a successful event. I hope that events like this will happen regularly in the future.”

Paul Evans, ISEiW’s project director, said: “The ISEiW team believe initiatives such as this are incredibly important to ensure we inspire learners from all backgrounds, and give everyone the opportunity to get involved.

“The event saw us engage a new wave of learners by utilising the Have A Go equipment, and hopefully have encouraged them to consider their own future career paths whilst showcasing how exciting vocational learning can be.”