Award finalist Joel connects to a rewarding career with Openreach 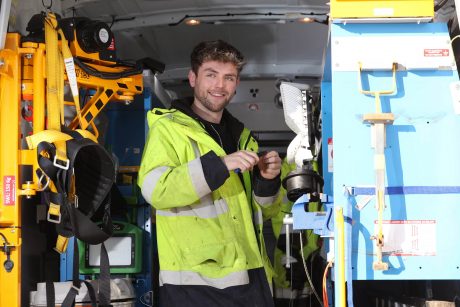 Apprentice and musician Joel Mallison has struck the right note with a career change, excelling as an apprentice with telecommunications company Openreach.

After initially studying music and graduating with a distinction in Radio Production, Joel, 30, from Abergavenny, ended up working in his father’s painting and decorating business for six years before seeking a new career.

An interest in telecommunications led him to Openreach where he completed a Foundation Apprenticeship in IT Software Web and Telecoms Professionals last September. The apprenticeship was delivered by Openreach and supported by ALS Training, Cardiff.

Now Joel has been shortlisted for the Foundation Apprentice of the Year award at the Apprenticeship Awards Cymru 2021.

The Apprenticeship Programme in Wales is funded by the Welsh Government with support from the European Social Fund.
Joel is now accelerating in his career, working to a high standard and demonstrating a huge appetite to learn new skills, meaning he is able to fix complex faults whilst also coaching new recruits at Openreach. His ambition is to become a senior engineer, just like his mentor at the company.

“One of the main appeals of the Apprenticeship Programme offered by Openreach was the opportunity to work in a career which could offer me real job satisfaction and security,” said Joel, who is the lead singer and guitarist in a band outside working hours.

“I feel that telecommunications is really important for the future and that’s something we have seen throughout the Covid pandemic. Through the Apprenticeship Programme, I have been able to launch my career and at the same time support the careers of others through coaching.”

One of the jobs that has given Joel the most satisfaction to date was working for 10 hours, using all the skills he has learnt as an apprentice, to fix a damaged fibre cabinet to restore broadband to more than 100 customers, many of whom were key workers.

Openreach Abergavenny patch manager, Matthew James said: “Joel’s work ethic is very strong and he is constantly looking for ways to improve his knowledge and skillset by being inquisitive and always showing initiative. He sets the bar extremely high in terms of my expectations for my engineers.”