Apprentice gets creative with Doctor Who promotion 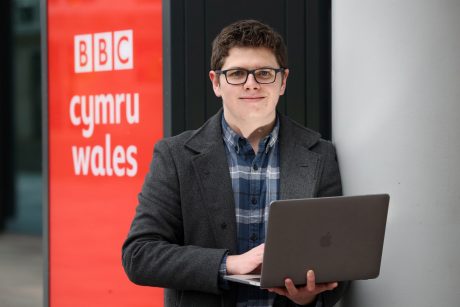 Just imagine the buzz of being asked to create and help manage the social media content for an iconic BBC television series at the age of 19.

That’s exactly what happened to talented Owain Carbis, 19, of Thornhill, Cardiff, during his apprenticeship with the digital and marketing department at BBC Cymru Wales.

Not only did he promote Doctor Who, but also Line of Duty, His Dark Materials, Sherlock, Luther, Our Girl and other new drama titles, working with stars including Michelle Keegan and Jodie Whittaker.

Now Owain has been shortlisted for the Apprentice of the Year award at the prestigious Apprenticeship Awards Cymru 2021.

For Owain, who is now working freelance, it was a dream come true to be working with the Doctor Who team, as he’s an avid fan. His work, which was seen by a worldwide audience of millions, was highly praised by senior colleagues at the BBC.

A dozen posters, which Owain created to celebrate the anniversaries of past Doctor Who episodes reached more than 12 million Internet users alone. He also co-created and sustained the ‘What happens next?’ series on BBC iPlayer’s Instagram stories, engaging with existing and new viewers.

Owain’s Apprenticeship in Creative and Digital Media, which was delivered through the medium of Welsh by Sgil Cymru, gave him video, graphic, website and social content skills which he is now utilising as a freelancer.

“I applied for the apprenticeship to get my foot on the career ladder in the world of digital marketing, aiming to learn the industry’s intricacies from the best in the business,” said Owain.

“To be entrusted with working on Doctor Who’s social media accounts – one of the BBC’s primary brands – demonstrates the trust and respect that colleagues have for me and for apprentices within the business. The transformation of my creative visions from idea to reality are a source of tremendous pride.”

Matthew Rogers, BBC Wales’ senior content producer, said: “Owain has produced outstanding assets with his video editing and graphic ability, always delivering the quality needed for high-profile brands. It has been a pleasure to see him grow and develop his confidence.”