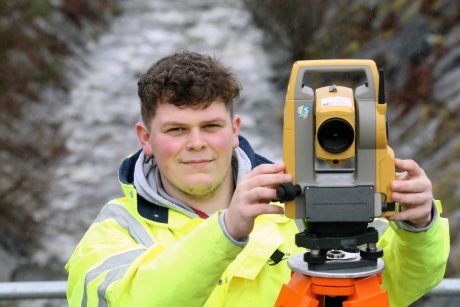 Apprentice Owen Lloyd’s mission is to become the best civil engineer possible as he strives to provide flooding solutions for the people of Rhondda Cynon Taf.

He completed a Level 3 BTEC in Construction and the Built Environment (Civil Engineering) course with distinction at Bridgend College, finishing his apprenticeship within a year – half the expected time. His has now begun a HNC Level 4, ultimately aiming to qualify as a Chartered Civil Engineer.

Owen hopes to become a qualified Institution of Civil Engineers (ICE) technician (EngTech) after being awarded an ICE Quest Scholarship and winning the Association for Public Service Excellence Highways and Street Lighting Apprentice of the Year Award last October.

Now he is in the running for the Apprentice of the Year award at the prestigious Apprenticeship Awards Cymru 2021. The winners will be announced at a virtual awards ceremony on April 29.

This annual celebration of outstanding achievement in training and apprenticeships will see 35 finalists compete in 12 categories for awards.

Owen began his apprenticeship with the council in September 2018, with the intention of rotating between different departments. However, he impressed so much in his first post that he secured a full-time technician’s role with the Flood Risk Management Team in just months.

Using computer-aided design skills, he has provided solutions to many potential flooding risks, including one involving a culvert in Treherbert. He has experienced 25 flood events, most notably Storm Dennis, and has supervised teams working on flood response and recovery actions in the Pentre area.

Owen said: “I carry out my work to the highest standard to provide the best service possible not only to my employer but also to members of the public who rely on my work to keep them and their families safe during storms.

“Being given the opportunity to learn whilst earning through the Apprenticeship Programme has massively built my confidence and encouraged me to push for the best outcome possible both in my education and for my career.”

Owen Griffiths, the council’s flood, water and tip risk manager, said Owen excels at his job, is always keen to learn new skills and is an asset to the team.

« Apprentice gets creative with Doctor Who promotion   —   Engineering apprentice saves employer £20,000 a year »